Vitamins are essential organic nutrients that  our pets must obtain via the diet, as they are not able to synthesise sufficient quantities themselves.

Their discovery and understanding of their functions is one of the major achievements in nutrition over the past decade and have led to huge advances in health and longevity. Vitamins are essential for growth, reproduction, metabolism, health and overall survival and are present in variable quantities in most foodstuffs. Diet supplementation is common to overcome this variability, along with losses incurred by cooking and storage of foods.

Vitamins A, D3, E and K exist naturally as oils and hence are fat soluble. They are stored in the body within fat reserves and various organs, such as the liver and kidneys, and can accumulate to potentially toxic levels if over-consumed.

Vitamin A  – is a key vitamin in the development and maintenance of vision, and deficiency can lead to blurred vision and blindness. It is also important for the integrity of mucous membranes and the maintenance of an effective immune system, and therefore low body reserves can impact on disease resistance, tissue keratinisation and fertility. Although high levels can be found in some animal fats, such as fish oils, cat and dog food are often supplemented with vitamin A in the form of stabilised retinyl acetate.  Vitamin D3  – associated with the development and maintenance of healthy bones and teeth, vitamin D3 modulates the assimilation and dissolution of calcium, phosphorus and magnesium into these tissues. Deficiency is associated with weak and malformed bone conditions, such as rickets and osteomalacia.  Vitamin E  – alpha-tocopherol is commonly added to cat and dog foods, and acts as a cellular antioxidant to support the body’s immune system. It is also important for membrane integrity and energy production within cells, and deficiency is associated with reduced fertility, muscle degeneration, and lethargy.  Vitamin K  – the key function of vitamin K is the maintenance of blood coagulation. And it reduces the risk of bleeding. Although small quantities can be synthesised within the body from other compounds, dog and cat foods are commonly supplemented with heat-stable forms. 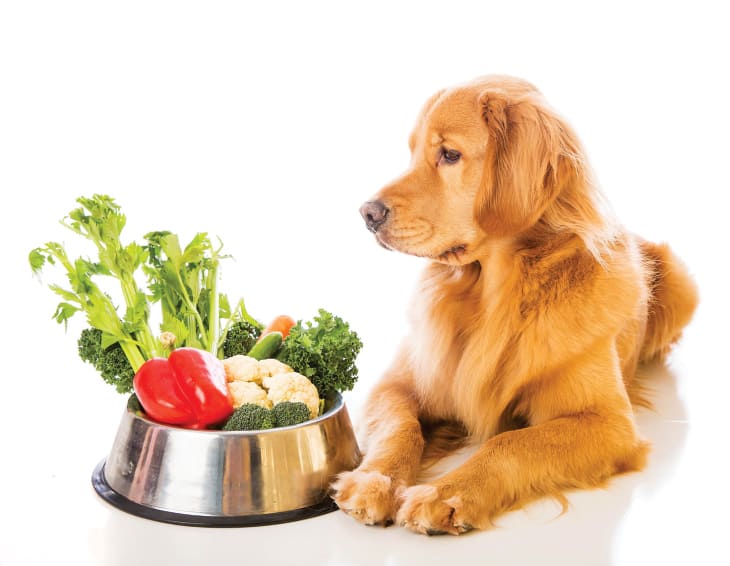 As their name suggests, these vitamins are soluble in water and hence can be excreted via the urine. For this reason, toxicity is rare, as they do not generally accumulate in the body, which also means that they must be provided on a daily basis via the diet.

Vitamin B1 (Thiamine)  – is important for the metabolism of carbohydrates and proteins, and is involved in the functioning of the nervous system. Early signs of deficiency are associated with loss of appetite and diarrhoea, followed by fatty liver and heart, convulsions, and gastrointestinal haemorrhage.  Vitamin B2 (Riboflavin)  – has antioxidant functions, as well as metabolic actions and involvement in ligament integrity. Low body reserves result in poor coat condition and dermatitis, cataracts, growth abnormalities, and mucosal inflammations.  Vitamin B6 (Pyridoxine)  – pyridoxine’s main function is in the metabolism of proteins, and dietary deficiency leads to fatty liver, ataxia, convulsions, diarrhoea and vomiting.  Vitamin B12 (Cholecalciferol)  – is important in the maintenance of blood cells and protein metabolism. Although required in minute quantities by the body, deficiencies can lead to anaemia, growth defects, organ failure and poor coat condition.  Niacin  – is required for the metabolism of proteins, carbohydrates and fats, as well and the maintenance of skin integrity. Dermatitis and ulceration and common symptoms of deficiency, along with anorexia and bone deformations.  Pantothenate  – is involved in amino acid metabolism and skin integrity and low body status results in skin lesions, dermatitis, blindness, and depressed immunity.  Folate  – is required for efficient amino acid metabolism and immune support. Deficiency results in poor growth, poor skin conditions, anaemia, and reduced fertility.  Biotin  – biotin is involved in the metabolism of fats, carbohydrates and proteins and, although it can be synthesised within the body, a deficiency can quickly result in poor coat conditions, joint stiffness, and reduced fertility.  Vitamin C  – is an important antioxidant which supports the immune system of the body. It is also important for the correct functioning of hormones involved in processes such as bone calcification. Deficiency is associated with prolonged healing, haemorrhaging depressed immunity and bone deformation.

It is estimated that 75% of all non-accidental deaths in dogs are caused by cancer, renal failure, or heart disease, with many of these being age related. Evidence suggests that many of these conditions are exacerbated and perhaps caused by the damaging effects of free radicles, particularly during early years when tissues are developing and maturing.

Free radicles are natural by-products of metabolism, but are produced in larger quantities during stress and tissue injury. They attack cellular membranes, nucleic acids, and proteins, which can lead to cell necrosis, genetic damage and protein malformation.

Vitamins E, C and beta-carotene can prevent or reduce the negative impact of these compounds, and hence reduce the incidence of a number of associated illnesses.

Dietary supplementation above the minimum nutritional requirement has also been shown to reduce healing time and aid recovery from high stress situations, like weaning or extreme activity.

Heart disease in dogs is increasing in many countries, and is particularly prevalent in larger breeds.

Antioxidant vitamins can assist in the prevention of artherosclerosis by inhibiting the modification of lipoproteins, which is an important initial step in the creation of these blood restricting compounds. Reactive oxygen species, such as hydro peroxides, also attack cardiac tissues directly and so antioxidant vitamins can also protect these sensitive tissues by inactivating and neutralising these compounds.

Hypertension, is also associated with cardiovascular disease, whereby the kidneys ability to excrete sodium is impaired, leading to fluid retention and congestive heart failure. Antioxidant vitamins can reduce this effect by aiding blood flow and improving renal and hepatic efficiencies.

Cancer is defined as uncontrolled cell proliferation and is a highly diverse and complicated disease. The transformation of a normal cell into a cancerous cell involves initiation, promotion and progression stages, and the genetic mutation can be induced by radiation, mutagens or pro-oxidants.

Vitamins C and E are known to block the formation of mutagenic compounds, such as nitrosamines created from nitrite ingestion, and so have been suggested as anti-cancer treatments.

In addition, their antioxidant properties help to support the body’s immune system and hence enable the body to fight potential carcinogens.